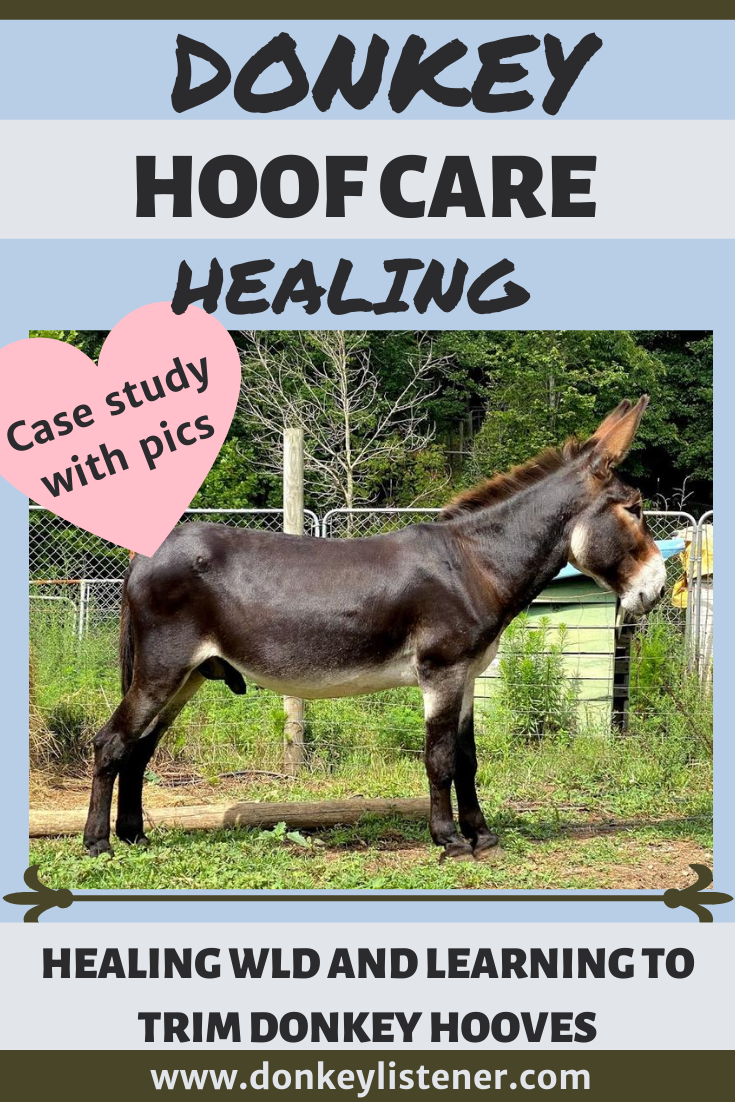 Do not underestimate how important healthy donkey hooves are!  This is a case study of Dylan. A mammoth donkey and a rescue who came to me with pretty bad hooves in February 2020.

Dylan is a gorgeous donkey with a shiny coat, nice thick build, laid back temperament but the poor guy has got some sad donkey hooves.

Dylan had over grown slippered and broken hooves when he came to me. He had them crudely nipped off by the vet school that did his gelding surgery. There was a crack that concerned me in the front right hoof and I could smell the thrush. I treated the thrush Tea Tree oil, and that seemed to clear it up, but the crack looked worse.

The following 2 months he had them trimmed by a farrier but went slightly lame after both trims. That farrier said the crack was the beginning of WLD and with regular 4 week trims and WD40 it should clear up. This WD40 info seemed sketchy to me and potentially harmful. For that other and reasons, I sought another farrier.

The new farrier did a good job trimming, but I think I asked to many questions or maybe he didn’t want to deal with the fact that I bring in rescues with problem hooves. Whatever the case, he left me hanging without a farrier when it was time for all my guys to be trimmed and as I was having some lameness issues with Dylan. His suggestion was to soak Dylans foot in Epsom salt water, which later I found out could have possibly made it worse.

For over 2 weeks, Dylan limped as I followed this poor advice. Thankfully, I had signed up to take a Donkey Hoof Course with Megan Hensley, aka, The Donkey Farrier and learned some better ways to treat the issue. Check out her website and sign up for her mailing list here: Holistic Hooves.

WLD and other donkey hoof concerns are important. Don’t ever let a farrier tell you to not worry!  I’m just so tired of local farriers acting like my concerns aren’t valid… my lame donkey, that is in pain says they are!

It’s important to understand how to support your donkeys hoof health and make sure your farrier is doing a good job.

Not all farriers, in fact most farriers here, do not trim donkey hooves right. Many farriers will tell you WLD or thrush is no big deal. This is not true! If ever you have a concern about your donkeys’ hooves and your farrier dismisses you, please take your donkeys hoof health into your own hands and find another farrier or at least better advice.

This is where I’m at now as of Aug. 2020. A couple of days after the soaks he started walking better, but now his other hoof is showing signs of thrush again. So I’m treating that too.

Here are pictures of Dylan’s hooves. The top 2 pics are taken 7 weeks here after his last trim. I was only able to trim the hoof with WLD because putting the extra weight on it while I held up the other hooves hurt him. Hopefully, I will be getting to those soon as his healing continues.

Since I am just learning, I trimmed very modestly, under the guidance of the donkey farrier, the toe area and rasped, which you can see in the bottom picture on this collage. You can see the hole at the top where the problem is coming from. 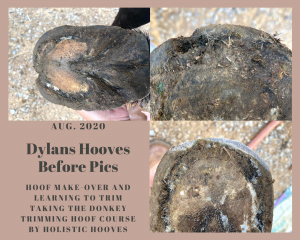 August Update: I ran into some issues with trimming Dylans hooves… I am not strong enough to nip through them more than the tiniest edge. The standards hooves aren’t so hard but I’m seeing that the mammoths hooves are just to hard and my hands to weak. Despite buying a recommended good pair of nippers, I can barely get the edges clipped. (My nippers are 12″ and to get more leverage in nipping Megan recommeded the 15″ so maybe that will help)

I’m having the same problem with the soles on all the donkeys, really. I bought a fantastic hoof knife, but their soles are so thick and hard. My donkeys do not have a lot of hard surfaces here in SE TN.

Depending on your area and individual donkey some people can get away with just rasping frequently and not have to mess with the sole but that hasn’t worked well for my guys. Most of the ground is soft here so they tend to overgrow their soles and too much heel.

So realizing my lack of strength, I looked once again for a farrier to help me. I contacted several and told them about Dylan. One farrier did not dismiss my concerns about Dylans WLD and my other rescue donkeys hooves. So he came out last week and gave everyone a trim but Jasper (I can trim Jasper, he’s easy so far!)

He said Dylan’s WLD was bad, his split frog in the other hoof was bad, but not the worst he’s seen. He suggested Hoof Data Clay and No Thrush powder since it even helps in wet weather. And that’s what we are having a lot of lately.. wet and humid weather.

He said the once a week soaks were fine but since they really only last 2 or 3 days it’s not enough and recommened more often (Megan agreed). Especially with our current weather. He said something that really hit home with me…

There will never be a perfect balance for equine hooves in our area. We are either to wet or to dry here.

We often hear if we get the right mineral, the right feed and keep a clean paddock, our equines hooves will be healthy. And these things matter so much!!!!

But even with these things in place, for those of us who live in wet and humid environments where the weather can also be extremely dry for short periods, this is just not ideal for donkey hooves. We are likely going to need a plan of action as soon as we see the slightest issues so we can avoid bigger problems.

So I’ve got the new stuff on order and it should be here in a couple of days. Then I’ll soak and apply the clay to keep the mud out and the powder to the thrush.

We’ve got loads of rain in the forecast and all the coming mud is not going to be good for this problem so I’m trying to make an area where he can move around well but stay dry.

Below is Dylan’s hoof that is affected by WLD after the new farrier trimmed. I will need to keep it rasped every week. 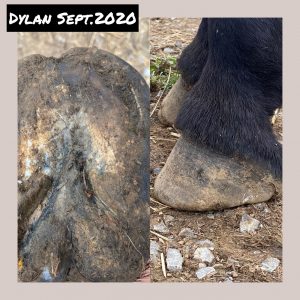 I made a pair of temporary boots for Dylan. They did give him some comfort but they are very temporary. I ordered some boots from Cavello but they sent the wrong boots! My poor boy…

Throughout September nothing changed until I got in a very special product. I soaked and treated with a poultice, hoof clay… nothing of significance improved. Then I ordered a product called Hoof Doctor, and this is what happened…

I’m not affiliated with this product but I would be because I love it!!! All my donkey’s hooves are looking better that I’ve used it on but most importantly Dylan is walking!!!!!!!!

He’s not healed completely, but he’s healing! I know I’m not out of the woods yet with him, but finally I am hopeful. I’ve got more of this stuff coming so my whole herd can benefit. Highly recommend Hoof Doctor.

Check back for Dylan’s progress, and hopefully my progress as I learn to trim and rasp what I can on this big boys hard hooves! 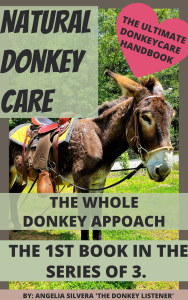 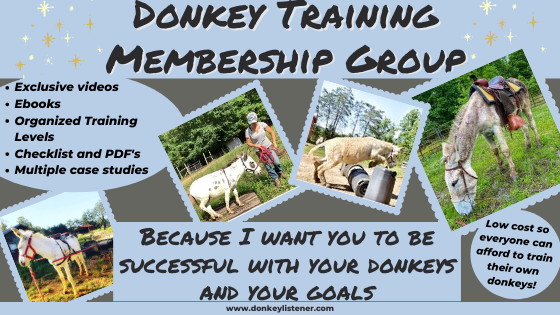 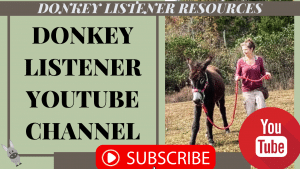 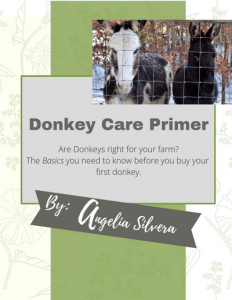